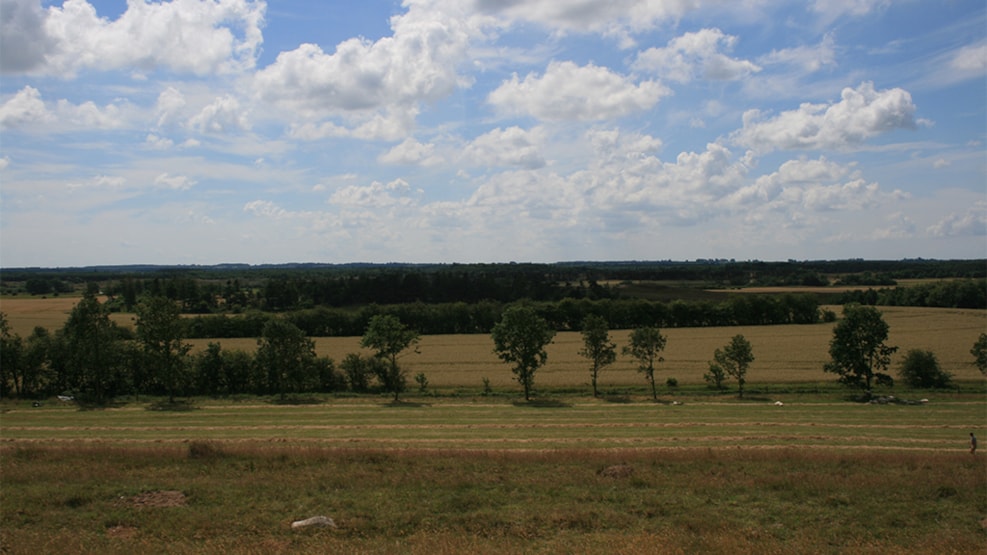 Gravpladsen ved Harreby south of Rødding in Sønderjylland departs from the traditional picture of a dolmen from the Stone Age: 3 stones supporting a large flat horizontal capstone situated on a hill granting visibility in the landscape. However, at Harreby, the dolmens are underground and oblong, at a length from 34 to 53 m and almost formed as a trapezium. The burial site includes 4 known dolmen chambers dated to 4000 – 2800 years before Christ. Two of the burial sites have been situated parallel to each other.

Archaeological excavations in 1936, 1956, and 1984 have shown a large burial site area with 4 underground dolmens where the bottom of the dolmens has been up to 2 m below ground level and the top of the dolmens 30 cm below ground level. The archaeological explanation of the underground dolmens is the fact that as to construction, it has been easier to dig big holes and lower stones into the ground, push the horizontal capstone on top of these, and then cover the stones, then having to lever the giant stones. At the burial site in Harreby, also traces of a long dolmen with trapezoidal ground plans and a rather big row of barrow circles were found, indicating that the dolmens have been covered by a mound.

Today, the area is preserved. A few km to the south, you find a corresponding number of burial sites from the same period of time, i.e. the area around Harreby has been inhabited for a rather long period.