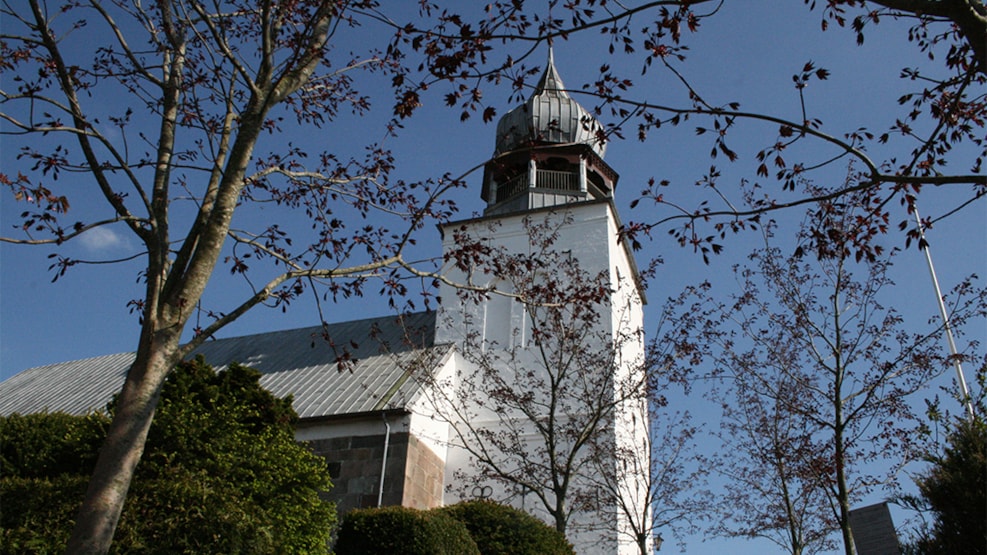 The church of Andst is situated on a hill and rises over the landscape surrounding the village of Store Andst. During the Middle Ages, the church has been an important landscape feature on the way between Ribe and Kolding, working as a landmark for travelers.

The church consists of a nave, a choir and an apse, built out of granite squares in several stages between 1172 and 1225. On the left side of the nave, a few Romanesque small windows are still intact. Later a whitewashed porch has been added, and in 1592, a tower with a special onion dome was built. It was King Frederik II who, during his trip in the area in 1588, asked the Lord of Koldinghus to build a tower for Andst church.

The apse is remarkable, as its outer part is bigger than a semicircle, thus giving the whole structure shape as a horseshoe. This shape is present in Ribe Cathedral as well. The entrance to the church nave, one has to go through a portal supported by four columns, with some sacred art carved reliefs on the lintel. Ribe Cathedral shows this feature as well, indicating a close connection between these two churches.

Inside the church, the interiors are whitewashed and the box ceilings are decorated with some rosace. The inventory is primarily from the Middle Ages and the Renascence, with the exception of the baptismal font, which is still the original one. The font has ten layers with enclosed reliefs. The altarpiece dates back to 1510 and is a joinery masterpiece featuring the crucifixion and the 12 apostles. Under the altar, some remains of a so-called emergency relief group can be seen. Previously, a few Romanesque paintings have been found in the church, but due to their very bad conditions, they had to be painted white.

In the nave hangs a painting dating back to 1602, with a Latin inscription that pays homage to the church tower builder, Governor Caspar Markdanner. The inscription has been written by cleric Jon Jensen Kolding, who wrote also the first known topography of the Danish Kingdom, in 1594.

In the outer wall of the guardroom a Romanesque stone is placed. The stone has two fields: in the first one, a man embracing a woman is depicted and in the second one there is a cow, probably carved by the same stonecutter that carried out the southern portal of the church.