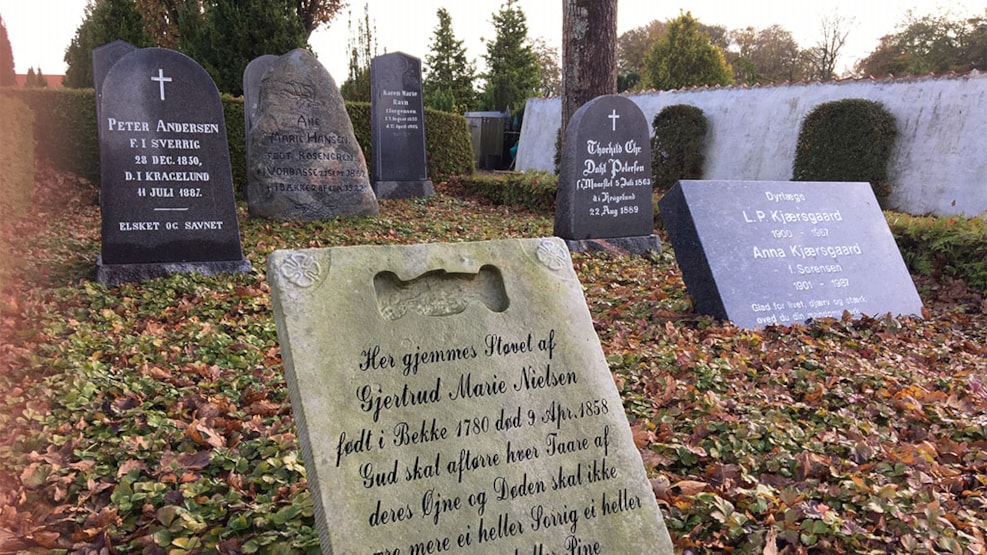 Bække Church is located in the southern part of the village of Bække next to the Ancient Road that reaches from the town of Viborg to Schleswig. The cemetery is today partially surrounded by a whitewashed wall topped with tiles, which replaced the old stonewalls in 1909.

The church is located on an elongated hill, and the cemetery east of the chancel gable once had a Bronze Age barrow. Today, the mound is no longer visible.

Bække Church is a Romanesque ashlar stone church erected around 1100 and has undergone several renovations and additions over the years. Today, the church consists of the chancel, nave and tower, but it originally also had an apse. There are doors to the north and south side of the church, but unlike other churches, the north door in Bække Church is wider than the south door, probably because the village homes were located to the north of the church. For the same reason, there is a gate in the north section of the embankment. The two corner plinths to the west feature carved heads. Above the south door there is also a tympanum depicting Christ on the throne with Saint Peter and Saint Paul kneeling on either side.

The church tower was erected in 1922 and until then the church bell hung in a bell tower in the cemetery. The porch on the northern side was built around 1600 and has a quite distinctive curved gable with cornice and lead roofing.

The Bække Church bell is from 1795 and was cast using the metal from the previous church bell. The old inscription has also been recycled. An archaeological survey in 1971 found 19 coins but the history of the church remains a mystery.

The Bække Church interior is whitewashed and has a coffered ceiling with rosettes. There is wooden panelling along the southern and northern walls, especially in the nave. The panelling mainly dates back to the late 1500s. The current colour scheme in the church was devised by painter Ernst Trier in 1971. The font of reddish granite, dating from the Middle Ages, was once painted. The other furnishings are from the Renaissance. The most notable woodcarving is featured on the pulpit from 1638 and depicts, among others, the evangelists. An old crucifix hangs by the pulpit. The traces of crude medieval frescos have been uncovered, but these have since been whitewashed. The current altarpiece, which consists of a painting by Rudolf Rud-Petersen, is from 1941 and depicts ‘The invitation to the big feast.’ The alter table is of masonry.

According to the old church books, Bække Church suffered considerably during the Dano-Swedish Wars. A new chalice and a new key were purchased following the Swedish invasion!

When church owner Hans Adolph Poulsen to Hundsbæk died in 1752 he was buried in a brick tomb under the chancel. Shortly after the funeral, the burial chamber was filled with soil. The temporary wooden cover, however, did not prove strong enough and members of the congregation taking part in communion once fell through into the chamber. The conundrum had been caused by the failure of the mason to deliver a headstone.