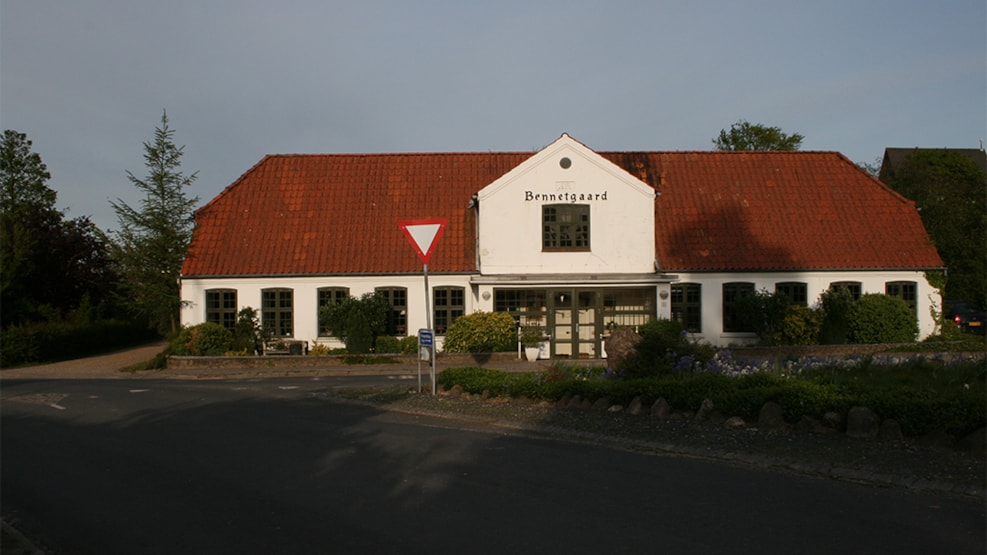 From the outside, the whitewashed former farmhouse isn’t all that conspicuous, but the place is historically quite significant all the same. Bennetgård is a rest home for those of Danish decent living abroad, i.e. mainly for those identifying as Danish living in South Schleswig, Germany. Every year, around 150 elderly from South Schleswig visit Bennetgård to enjoy two weeks of fresh air on Danish soil, good food, sing-alongs and socialising in a historical setting. It is a life-affirming tonic.

A little history
“You shall not be forgotten” was the message from Danish politicians to the Danes living south of the border who became citizens of the Weimar Republic as a consequence of the 1920 referendum that redrew the national border, although did not restore it to the pre-1864 Prussian-Danish division. Since 1920, a number of Danish cultural associations on both sides of the border have sought to live up to the commitment. One of the initiatives is the rest home in Københoved, which is still alive and kicking and a visible example that the struggle to maintain a Danish national identity south of the border lives on.

Bennetgård was used as a meeting place during the years in which South Jutland was under Prussian rule (1864-1920). Prussian gendarmes (or border guards) were to be present at public events at the farm to keep an eye on developments. However, the gendarmes found it difficult to eavesdrop on gatherings in the private living rooms behind the long farmhouse stonewall. You can see this window-less wall from the outside on the north side of the property.

The woman behind
The rest home was established in 1936 with Jutta Kloppenborg-Skrumsager in a pioneering role. She was born and raised on the farm to be part of the national quest to uphold the Danish presence in South Jutland. Her father, Jørgen Nielsen Hansen Skrumsager, had been a founding member of the Language Society, and was involved in the national movement from 1860 to 1920. She was also the sister of Hans Diderik Kloppenborg-Skrumsager. As an adult, Jutta lived in Copenhagen where she advocated the South Jutland cause. She inherited her home of birth in 1931, and the following five years she held public lectures to raise money to set up a rest home for expatriates. Originally, the idea was that Danes who had immigrated to America could stay at the rest home. Today, ”Dansk Sundhedstjeneste for Sydslesvig”, the Health Service in South Schleswig, is responsible for admission to the home.

The Bennetgård rest home is still a private institution and is financed by private endowments and foundations. Fundraising is conducted by the five unpaid members of the board of directors. Among the donors is the A. P. Møller Foundation, which contributed DKK 2.5 million towards renovation work in 2001. A manager is responsible for the daily operations and acts as a host for guests.

The farm itself dates back to about 1690. The name Bennetgård (Bennet Farm) derives from Bennet Olufsen, who owned the farm from 1761 to 1802.