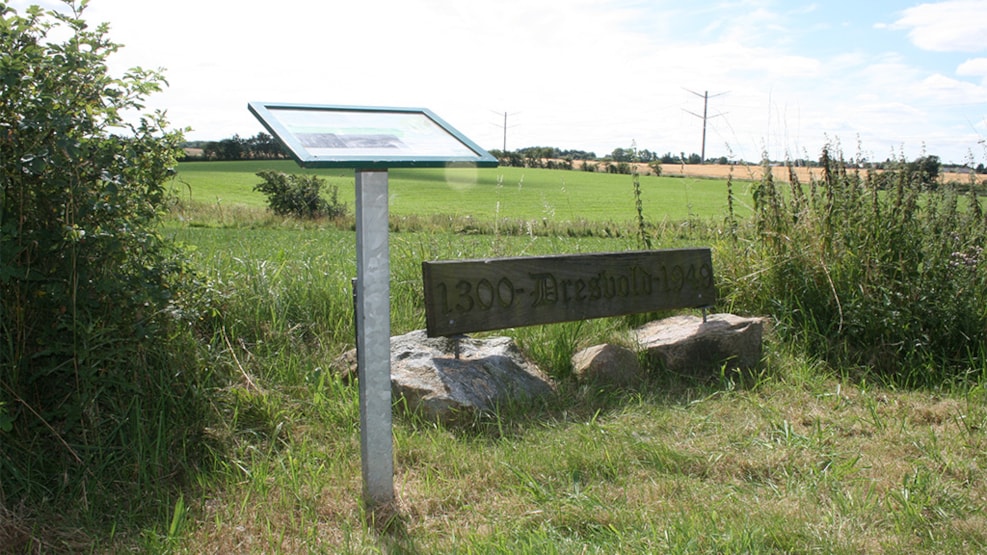 Dresvold, the castle mounds at Skodborg

Dresvold by Skodborg is one of the many anonymous castle mounds in southern Jutland.

There are small, anonymous castle mound throughout the inaccessible areas of the fertile region of Southern Jutland. These castles were created during the first centuries of the Middle Ages by the many principal landowners of the region. Little is know today of who created the vast majority of these mounds. These lords of the land seldom left sufficient testimony of their undertakings.

The many lords
Throughout the first centuries of the Middle Ages most lords lived in the villages. Their houses were bigger and nicer than those of the common peasants, but only differed slightly. And there were many lords at the time since all it took to be a lord was the ownership of a few farms in order to provide armour and horses when the king called for the defence of the country. Consequently, there were hundreds of lords in Southern Jutland, and only a few of them have left any testimony in the form of written sources. We simply do not know what many of them were called, although in some cases we know their names but cannot tell where they lived.

The perilous 1300s
The 1300s was a difficult time for all these lords of the land. The many wars between the rulers of the Duchy of Holstein and the Danish King Valdemar IV Atterdag – made life as a landowner challenging, whether you owned many farms or, as the nameless Lord of Skodborg, perhaps just a few. So it became necessary for each lord to be able to defend himself. Many moved out of the villages and built themselves castles in hard-to-reach places. Some simply moved their entire farm into the bogs, while others, such as the Lord of Skodborg, opted for a halfway solution – only the defence tower was erected in the wetlands by the river of Skodborg. The rest of the farm was situated on dry land.

The stone house
The road construction authorities came across the remains of a wall when the expanded the Skodborg-Gejlager road in 1949. It proved to be a compact foundation made of fieldstones for a 6.15 x 3.15 m large stone house, which was widest from north to south. The one-meter wide stonewall was held together using seashell lime and the remains reached a height of 1.70 meters. The house itself was probably built of brick since there were many bricks on site. While the fieldstone walls formed the foundation of the house, they also formed the setting of a basement. The inner side of the walls were whitewashed and a five-meter long sloping passageway led from ground level to the basement entrance, which was located in the south-facing gable. In the northwestern corner of the basement, archaeologists excavated a baking oven. Dresvold was excavated by Haderslev Museum in 1949.

Tower mound
The stone house must have been the manor house of the unknown lord. In order to protect himself against attacks, he built a circular tower in the meadows south of the farm. The castle mound was approximately 20 meters in diameter and was surrounded by a five-meter wide inner moat in addition to an outer moat. In 1808, the castle tower was referred to as having been sizeable and surrounded by ramparts.

Age
A coin from the reign of King Christoffer II was found trampled into the oldest layer of the basement flooring. The coin had been minted in Ribe sometime in the 1320s. Since the age of the coin coincided with that of the pottery found in large quantities in the basement there is hardly any doubt that the stone house was built around 1330, and was probably allowed to stand for several decades.

The Lord of Skodborg
What happened next is unclear, but it is reasonable to suppose that the lord and his family did not survive the turbulent years of the mid-1300s. His estate was seized by some of the lords who had survived the troubles, such as the Lord of Limbek by Tørning. So the Lord of Skodborg either perished or was perhaps forced to become a tenant farmer. In any case, the manor farm by Gejlager disappeared, with only the foundation of the stone house still preserved underground. Naturally, the basement is heritage listed.