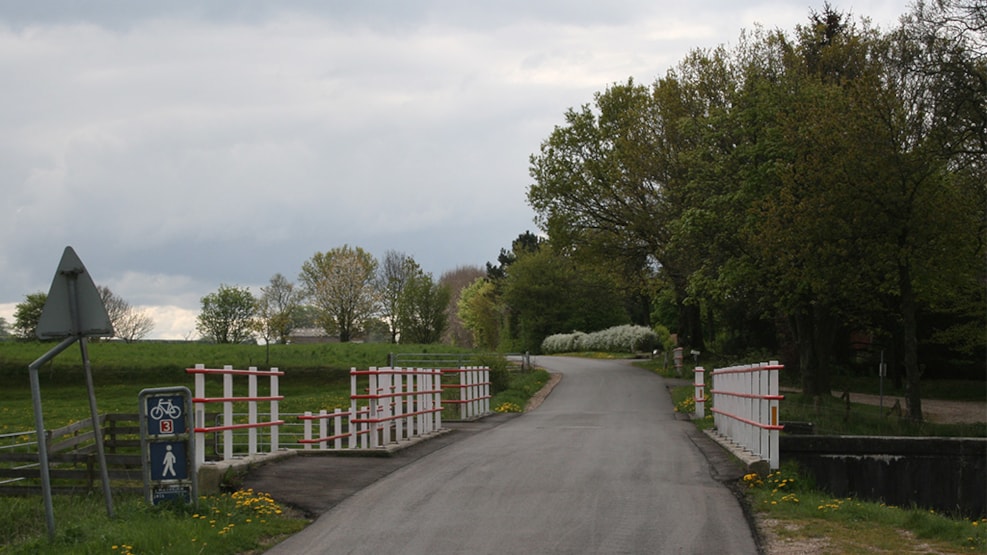 A concrete construction from 1924, Frihedsbroen (Freedom Bridge) crosses the river of Kongeåen, allowing wayfarers to travel between Københoved and Askov.

Next to the bridge, the characteristic red-and-white fencing (the Danish national colours) has been preserved. This kind of fencing was used by locals between 1864 and 1920 to show affinity and loyalty to Denmark.

History
Freedom Bridge is named after the stone house located just north of the bridge, namely the house made of fieldstones built in 1870 by H. D. Kloppenborg from Københoved. He was one of the pioneers of the region’s struggle for reunification with Denmark. When he built the house there was also need for a bridge. The original ford, which allowed wayfarers to cross the river before the bridge was built, was located further west.

Irrigation canal
If you stand on Freedom Bridge and look southwards downstream, you'll see a dike that runs parallel to the embankment. This is the remains of an irrigation channel system. The channel, dating from the years after 1874, is 8 km long and runs parallel to the river from Knagemøllen, about 3 km to the east where there was a dam. The water was originally used to irrigate the low-lying meadows between the channel and the river through a distribution system of irrigation ditches. The water was nutrient-rich and enhanced the yield so local farmers could better see through the winter.