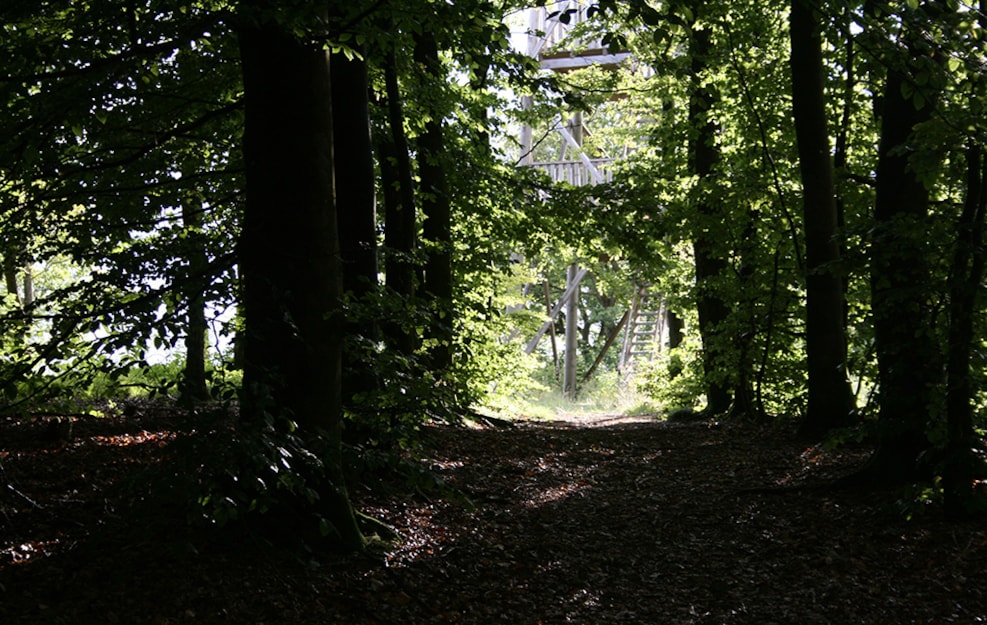 Hundsbæk Plantage with its winding roads and rolling hills is quite unusual for a heathland wood, which makes it an ideal spot for a nature walk.

The wood (or plantation) is located north of Vejen. In the 165-hectare forest you can follow an approx. 2.4 km long footpath to the 91-meter tall hilltop “Fru Mettes Bjerg” (Mrs Mette's Mountain), one of the highest points in the area.

Fru Mettes Bjerg
There is a captivating story behind the name “Fru Mettes Bjerg” (Mrs Mette’s Mountain). Mrs Mette was married to the Lord of Hundsbæk, which in the 1500s was a nearby castle. However, she fell in love with a young farmhand. They met in secret on the hilltop, which later became known as Mrs Mette’s Mountain. Their rendezvous resulted in a child. Mrs Mette took the child’s life and buried it on the same hill where she met with her lover. Her misdeed was not discovered before after her death.

The tower
On 28 June 2009, a new 15-metre wooden lookout tower was inaugurated. The four pillars of the tower are of Pomeranian pine. From the top you can enjoy magnificent views and see as many as 18 churches in the region. In very clear weather, you can see as far as the Little Belt Bridge and the smokestacks of the town of Esbjerg. At the top of the tower you are 106 meters above sea level. The tower is also good as bird-watching spot.