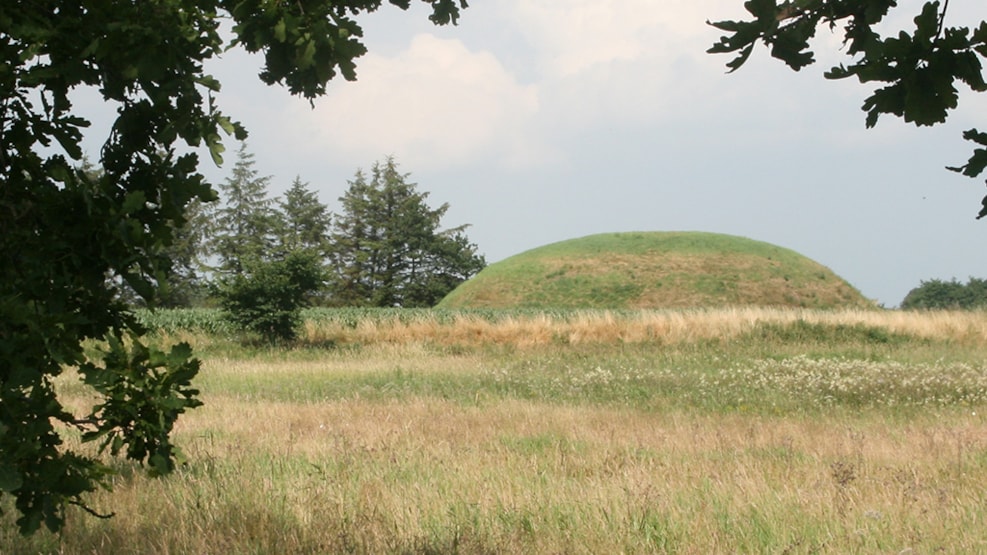 Skelhøj is an impressing big burial mound from the Bronze Age near to Kongeåen and Tobøl.

The excavation of Skelhøj provided unique knowledge about the work involved in building burial mounds of this size. From the small path leading to Skelhøj and around two other mounds, you have a beautiful view of Kongeådalen (valley of the small river).

History
Skelhøj is situated in a centre where the ancient arteries, on land and at sea, crossed each other. 3700 to 3100 years ago, 26 burial mounds were built here, many of them being more than 30 m in diameter. Skelhøj is the biggest of these, being 7 m high and 30 m in diameter, built with rather sheer sides at the lower part, resulting in the mound being rather significant in the landscape.

Together with Rishøj and Storhøj which are also situated at the paths leading through the area, the mounds have made out a rather big monumental mound complex having attracted much attention in the Bronze Age.

Below Storhøj you find tables and benches with a magnificent view of Kongeådalen.

Building method
The excavation of Skelhøj in 2002 – 2004 provided the archaeologists with new knowledge about the way in which people built the big burial mounds in the Bronze Age. Skelhøj was built in accordance with a very well-structured and thought out plan, permeated by religious symbolism. The turf used for the mound was cut right next to it and placed with the grass downwards in eight sections of the same size. Each section had its own work group. The borders between the eight sections form a wheel symbolizing the sun and the cyclical in time and life. The area at the bottom of the mound where the turf had been cut was left totally unproductive for years. During the building process, the mound was extended in concentric circles until the monument reached its full size. The first soil layers on top of the grave were worked up, so that a thin mantle of iron evolved over the inner part before the turf was laid on top of it.

More knowledge
The permanent exhibition in Museet på Sønderskov shows a profile of Skelhøj in 1:1 where the construction of the layers and the mantle of iron around the inner part of the mound appear.