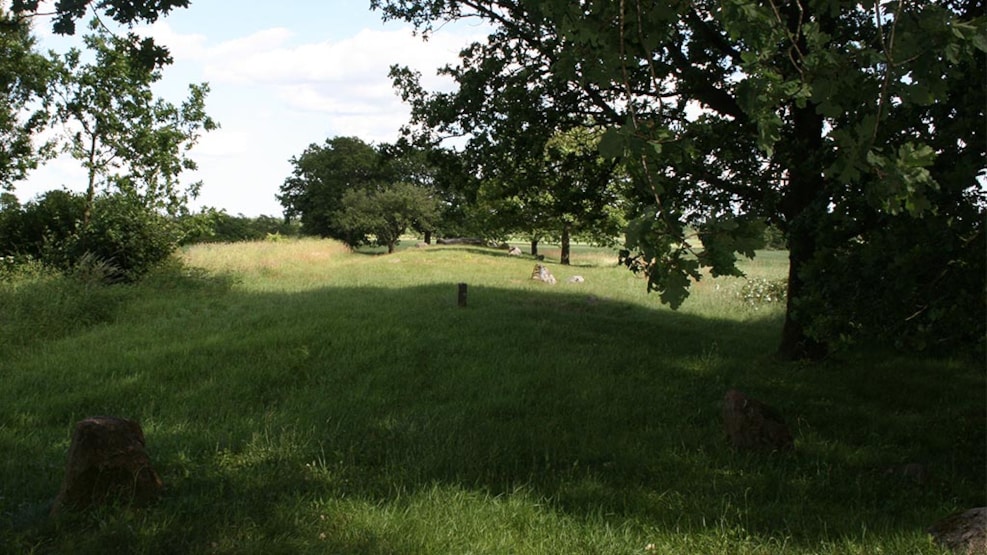 Store Jyndovn, south of Hovborg, is a 117m-long and 8m-wide long barrow from the Neolithic period, which is one of the largest prehistoric monuments in South Jutland.

The barrow dates to around 3500 BC and is clear evidence of the earliest farmers’ views about the dead and their treatment.

The story
The barrow itself consists of 62 outer stones and a well-preserved chamber with a capstone. 180 stones originally stood next to one another all around the edge. These stones would have meant that the barrow was an impressive sight. Between the outer stones and the chamber, the barrow was filled up with layers of stones and earth, so that a raised platform was created. The platform only went up to the lower edge of the capstone, which remained visible.

At the eastern end, a large chamber is preserved with a capstone measuring 3 metres across. There were originally several chambers in the mound, but these were quarried for stone at the beginning of the 19th century. The barrow was protected in 1841, along with several other monuments in the area.

Store Jyndovn is one of many prehistoric monuments around Hovborg, and is known as ”Æ Stuer Jyndovn”. The name "Jyndovn" is an old Jutlandic name for megalithic tombs from the Neolithic period. The name is composed of Jynd, which in Jutlandic dialect means giant, and oven. The Jyndovn is therefore the giant’s baking oven, with the name stemming from the popular beliefs that were held about megalithic tombs in the past. Only giants could have moved and handled such large stones.

How to find Store Jyndovn
You can find the long barrow by following the coast-to-coast path from Hovborg to Klelund. By car you turn off at Grindstedvej 44-46, and follow the marked path north for around 300m. There is an information board at the barrow.