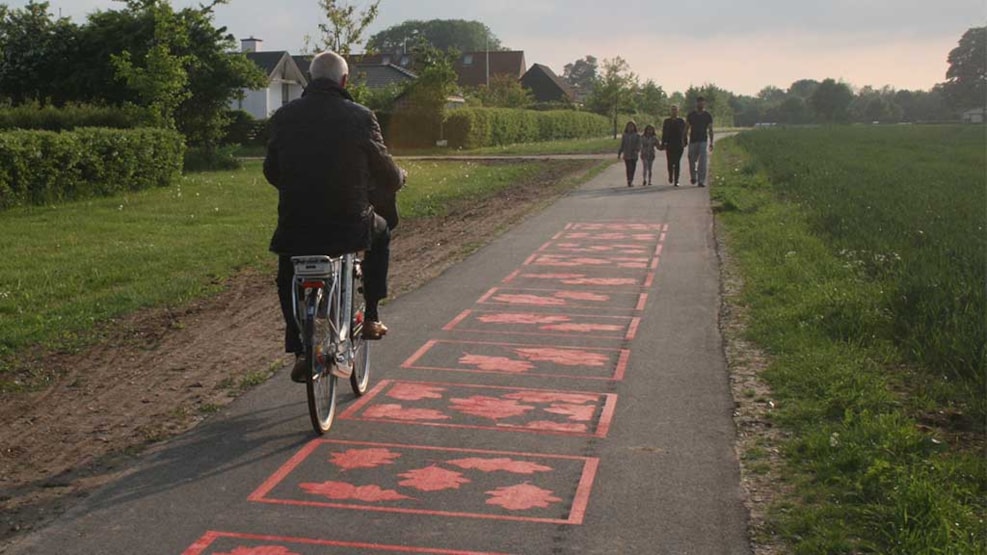 Between Askov Church and Vejen Idrætscenter (Sportcenter Denmark) the hiking trail of the ancient road Hærvejen follows the Rølkjærstien (path). A paved path passing through deciduous forest and the border between open land and newer parts of Askov. The route forms the change from active life in the industrial city of Vejen and the Folk high school city of Askov.

On this path section large red patterns are painted directly on the asphalt symbolising the historical DNA of Vejen and Askov. The theme for the patterns is weaving, because around the Folk High School of Askov weaving courses and weaving schools developed where among other activities weaving teachers were educated. In Askov Anders Lervad established his company, which manufactured the famous Lervad Weaving Loom. Moreover, the oldest loom in Scandinavia was found in the neighbourhood.

Insects and oak leaves
Closest to the forest the patterns are inspired from nature and especially the unique insect population, which can be found in and around the very old oak trees. These trees also gave inspiration to the swirling autumn leaves. The forest is forest reserve and surrounded by protected dykes with big 150 year old oak trees. The dykes were field boundaries after the enclosure movement from the original farmer village of Askov.

Weaving patterns
After this follows weaving patterns taken from “Vævebog for Hjemmene” (Weaving book for domestic use). The book is written by Jenny la Cour and Johanne Siegumfeldt. Since the end of nineteenth century, three addresses in Askov have in turns hosted weaving schools. In 1889, Jenny la Cour started the first weaving school in Askov in the house “Veum” at the Folk High School of Askov. Here she taught the students weaving of strong articles for daily day use in the households of that time together with among others her niece Johanne Siegumfeldt.

Birds
The last set of patterns expresses bird motives developed with inspiration from and based on Inge Bjørn’s weaved picture tapestry: Labyrinth from 1985. The art work can be seen at Vejen Gymnasium (the general upper secondary school of Vejen). During the period 1953 – 1993, the Weaver Inge Bjørn (1925) was weaving teacher at the Folk High School of Askov.

The “weaving trails” are part of the ambitious urban open space project SPORET I VEJEN, the purpose of which is to create coherence between various urban open spaces with their characteristics, applied by various age groups. SPORET I VEJEN brings into focus the unique culture history of the area. The entire route is marked with a red painted trail which primarily follows the pavement surface.